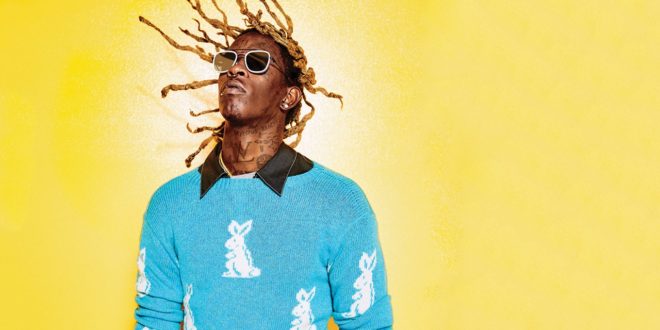 Young Thug is a rapper, hip-hop artist, a songwriter, a singer, and also a record producer. He is very popular all around the world and he has a very good reputation in hip-hop circles. He worked with many music stars, like Gucci Mane, Drake, Calvin Harris and many more.

One more thing that Young Thug is famous for is his style, he is considered a fashion icon. He has a very unique and eccentric style. He comes from Atlanta, which is the epicenter for famous and wealthy rappers. If you want to know how much Young Thug is worth, continue reading this article.

The real name of Young Thug is Jeffery Lamar William and he is born in Sylvan Hills, Atlanta. Other famous people who share their hometown with Young Thug are 2 Chainz, Waka Flocka Flame, Ludacris and Peewee Longway.

Young Thug is currently engaged to his fiancé Jerrika Karlae and they live in Buckhead Atlanta in a house Young Thug bought in 2016. He also has six children with four different women.

He started his career when he caught the attention of infamous Gucci Mane who decided to sign him off to 1017 Brick Squad Records in 2013. He then released his 4th Mixtape named 1017 Thug and it was named the best mixtape of the year 2013. His best-known single on that mixtape was “Picacho”. And also, the year he released some other singles like “Stoner” and “Danny Glover”.

In the year 2014, while he was still signed to 1017 Brick Squad, he signed another deal with Birdman’s Rich Gang and he recorded a few songs with Kanye West and Metro Boomin, “The BLanguage” and “EWW”. He also did a collaboration with Lil Wayne on the song “Take Care”, that was released by Cash Money Records Rich Gang 2.

After that in 2015, he released another two Mixtapes, Slime Season and Slime Season 2. He released I’m Up, Slime Season 3, Jeffery mixtapes, in 2016. In that same year, he worked with rapper Drake on his songs “Ice Melts” and “Sacrifices”, where he provided vocals for his songs. He also worked with Calvin Harris on the song “Heatstroke”.

In the year 2017, he released another mixtape, named “Beautiful Thugger Girls” and he did a joint EP with DJ Carnage. He collaborated with Future on a mixtape called “Super Slimey”.

Young Thug really is popular and good at what he does, but he is also still new in the industry, so he hasn’t had many achievements or awards yet. But he did get nominations in the BET Hip Hop Awards and BET Awards. And he won an MTV Video Music Award in the category of Best editing in the year 2017.

Young Thug’s net worth is estimated to be around $8 million. But he also has some rent debts that go high up to $2.2 million as Heritage select Homes stated in their lawsuit. So, once he pays the debts his net worth will surely be lower.

In the year 2015 Young Thug’s net worth was $5 million and in the year 2016 it was $6 million, and that means that he has a positive growth on his net worth. There are some records that say that he earns between $1 million and $2 million a year. He earns the most from the sales of his music albums and his tours, but he also earns a lot from his sponsorship deals.

Young Thug is one of the most promising rappers of the future and if he continues to do his work like this, he will be one of the most successful rappers in the world. He just needs to stay away from the illegal business, because he has been arrested for possession of d**gs and guns several times.