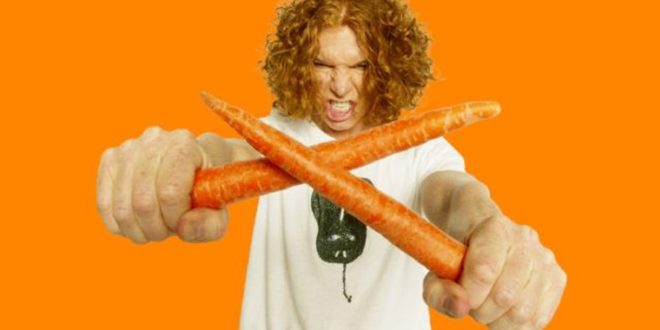 Scott Thompson, otherwise known as Carrot top is a screenwriter, actor, comedian and entrepreneur from the United States. He is well known for his strange humor that is often includes playing jokes on himself, his curly red hair and how he uses extravagant props while he does comedy. Let’s dig dip deep and find out what his net worth is in 2023.

Carrot top was born on February 25, 1965, in Rockledge, Florida. He was born to parents Dona and Larry Thompson. He finished his high school education at Cocoa High school and his college education at Florida Atlantic University in Boca Raton where he got a degree in marketing.

At the peak of his college life, he got the chance to go on stage with Josh Abelson. The pair of comedians and their actions didn’t really become popular because of repulsive and unpleasant jokes. But after a couple of months had passed Carrot Top put in the work and came up with a script about his college life that would eventually make the audiences see what his humor is truly like.

After a while, Carrot Top became a hit all across college campuses in the United States.

After finishing college and getting a degree in marketing he got a job as a bank courier. Even though he got a full-time job he didn’t stop performing and kept getting more and more popular because of his crazy humor. In 1990 he quit his job because he wanted to dedicate himself to becoming a full-fledged comedian.

The stand-up comedy field of work was very competitive so to stand out he decided to use props in his comedy acts. And the props he used matched both his personality and his flamboyant looks. He would often use paper cups and string as a telephone which sounds silly but it definitely worked and made his comedy acts even better, but most importantly it made him stand out. In 1992 he got an invitation to “The Tonight Show with Jay Leno” which rocketed his career even further.

After all the popularity and fame he had accumulated over the years he started getting a lot of opportunities to work on TV shows like “Larry the Cable Guy’s Christmas Spectacular”. For a couple of years, from 1995 to 1999 to be exact, he worked for Cartoon Network as an announcer. As time passed his career became even more successful and there were no limits to his comedy.

Carrot top was a genius when it came to comedy, but that wasn’t his only talent, but one of many and all of these talents brought him a lot of fame, money and success. In 1994 he started producing his own show called “Carrot Top’s AM Mayhem”, which ended in 1996. He also had a small stint In Hollywood, his first movie was “Hourglass”.

Another movie he did and was quite popular was “Chairman of The Board”. He also did a commercial for AT&T which of course brought him even more fame.

It is thought that Carrot Top’s net worth around $75 million. Most of the money he made came from TV shows, movies and a couple of concerts. It’s a pretty well-known fact that in the prime of career he would do more than 200 concerts per year and each one was sold out.

He is now 52 years old and lives in Las Vegas, you could say he’s living the dream. He does around 300 shows each year and he still has a lot of loyal fans. The last time he was seen on TV was on April 13, 2016, on @midnight where he worked as a panelist.

Previous Arnold Schwarzenegger Net Worth 2023 – World`s Favorite Austrian
Next Telugu Music: The Most Popular Artists and Songs of 2023