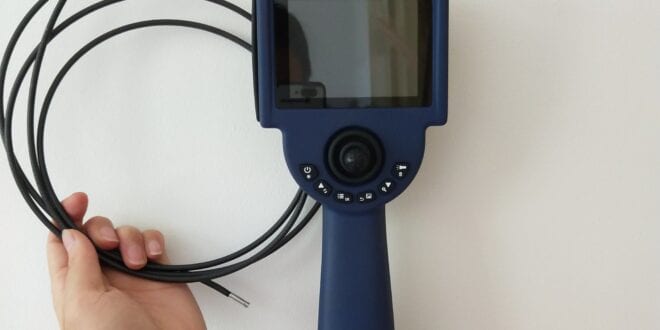 Borescopes serve as a non-destructive way to visually inspect components located in the tight spaces. They are used generally to inspect the condition of equipment and industrial systems and the quality of manufactured parts. The mechanical parts inspected by borescopes are generally inaccessible by other means or would require destructive means to access it.

There are different types of borescopes including video, fiber, and rigid borescope. Video borescope or video scope is similar to fiberscopes in function and appearance with a little change. A charged coupled device (CCD) is positioned at its tip to electronically relay images to the operator.

Videoscopes are used to get a real-time view of inspection areas and inspecting equipment like gas turbines. Are you on the lookout for videoscopes? Before going ahead with the purchase, make sure you are getting a good quality one. You need one that can effectively detect faulty parts.

A popular choice is the USA1000 J-4- 1500 Plus 4mm Videoscope. Check out its specifications on their website. This high-definition video scope renders crisp results and helps to inspect the equipment for defects.

What exactly is a high-definition video borescope?

The latest videos come to hit the market is a high-definition video borescope. The images it renders show more detail and is clearer thus making inspection more effective due to the HD technology used. The resulting video resolution is its huge plus.

The previous version rendered images up to 440,000 pixels, while the image that gets transmitted through the HD version is about 2 to 3 times better. There have been no upgrades in video borescope in the past decade, and the HD ones released currently are a major advancement in the field. When it comes to the television world standard HD implies 720p while Full HD implies 1080 pixels.

Noise refers to random color information or variation of brightness in the image captured. There are no noise issues in the images captured by HD video scopes. Noise is usually because of brightness, unwanted signals, high sensitivity of the camera, color inspection, etc.

An image may also contain noise issues if the surface inspected is glossy, light-starved, or located far away. HD videoscopes available come with noise reduction features, and thus the images appear just like the original site of inspection.

When an image is said to get distorted, it appears differently than it is. When capturing the wide fields of view with borescopes, there are chances for the image to have a fish-eye appearance. The edges could appear curved or circular. When inspecting turbine blades or other similar equipment, the edge of the equipment will appear bent.

When using higher definition borescopes to capture images, the lenses are different, and the distortion effect is more prominent. To eliminate this problem videoscope comes with automatic distortion correction. It works by automatically flattening the curved edges, which result in more accurate images.

When compared to previous versions, HD videoscope offers better flaw-detection due to the high resolution of results. There is more possibility to detect defects and hairline cracks. Even bad lighting wouldn’t serve as a deterrent. The smallest defects will be visible, and it is up to the inspectors to measure the defect and determine if it is admissible.

Previous generation video borescopes could record images from the site of interest that are situated at a maximum distance of 50mm. The high-definition video borescopes offer better zoom resolution. It can capture images of a specific site that is situated 105 mm away. The resulting zoomed image is sharp and doesn’t contain distortion.

Since zooming doesn’t compromise the quality of results, we don’t have to move the borescope tip closer to the site of inspection and instead use the zoom feature. This makes it possible to carry out the detailed inspection without adjusting the borescope tip.

A greater level of measurement reliability

Manufacturers have affixed upgraded LCDs in the latest HD video borescopes, which include a touch screen, improved side viewing angle, brighter display when used under outdoor lighting, etc. This upgrade improves the inspection process to a great extent since the resulting display resolution is twice that of the previous borescope version.

The high-end devices provide images from varying angles of internal activity. Hence the technicians won’t have to keep changing the position of a borescope to complete the examination as in with older versions which makes the entire inspection process quicker.

Earlier the pictures rendered have to be compressed due to bandwidth issues. The high-resolution images rendered using HD needn’t be compressed or pixilated. The upgraded videoscope can easily handle large file sizes. The reports can be saved immediately without any alterations to the results. Report-generation is quicker this way.

In terms of image resolution, no other version of the boroscope stands a chance against HD video borescopes. HD video boroscopes make the inspection better reliable, faster, and easier. Switch your older boroscope version to HD version for increased inspection accuracy.