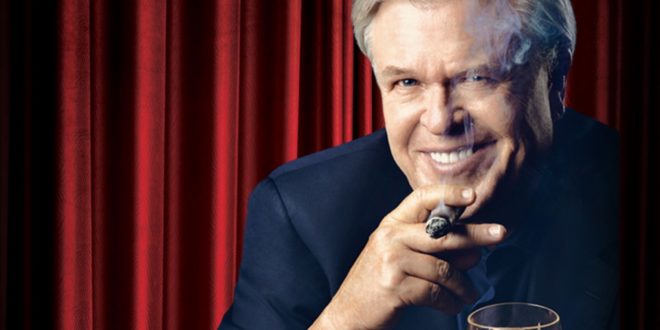 One of the most famous American stand-up comedians, Ronald Dee White, was born on the 18th of December in 1956 in Fritch, Texas. His birthplace has a significant role in his career as he made his name by doing some unique Texas things such as performing while having a cigar and drinking whiskey.

He is mostly known as a part of the Blue Collar Comedy Tour, but he is much more than just a comedian. He is also an actor, and published writer, and his book “I Had Right to Remain Silent, But I Didn’t Have The Ability” was in the New York Times bestseller list.

When he was a teenager, he joined the army, and he served a few tours overseas near the end of the Vietnam War. This experience made him grow as a person, and it had great importance in his life. Days in the army made him apprehend and helped him understand a soldier’s role in modern society. It also helped him realize that life is too pressing not to be joked about.

He was always known for telling jokes, and his career suddenly started when he performed at an open mike at a comedy club in Arlington. He was talked by a friend to participate, but what both of them didn’t know is that Jeff Foxworthy, a member of the Blue Collar Comedy Tour, was in the audience. Soon after that, he starts touring with the Blue Collar Comedy Tour, and in the early 2000s, the show reached its peak earning more than 35 million dollars while performing in over 250 cities all across the USA. Touring and doing what he loves was an excellent starting point for his solo career as he used his fame gained through the tour in his future deals.

In 2003 he released his first solo album Drunk in public, which was welcomed by the audience and enabled him to have his Tv Show in 2005. He is a stand-up comedian with great and famous stand-up routines, and he was nominated multiple times for the Grammy Awards for the Best Comedy Album. The last nomination was in 2014 for the album A Little Unprofessional, and if he continues to work at this pace, it will not be his last, that’s almost certain. Ron White is known as a generous humanitarian, and a person dedicated to charity work. Time in the army made him aware of the help needed for wounded soldiers and soldiers (many of them awarded) with PTSD. All of this is noticeable as he donated money for injured soldiers on numerous occasions. After Hurricane Katrina, he held multiple benefit shows to help raise money for people who lost everything. For all of his humanitarian work, he got honored by getting a “Patriot Award” for helping those in need.

He is so popular and cherished in all the USA, especially in Texas, where he even has his day. Ron White Day got legislated by the Texas officials, and it is celebrated every 27th of April since 2009. In 2009, along with the producer Michael Blakey, Ron White formed the OMG (Organica Music Group), to promote established musicians and comedians. Since then, the OMG was the sole publisher of all of his DVDs, live shows, and other possible future books. Some may say that his style got him the attention, but his jokes kept the audience, and some of his famous quotes are:

“I believe that a bad Super Bowl halftime show is still better than a soccer game.”

“I believe that when life gives you lemons, you make lemonade. Then find someone whose life gives them vodka and have a party.”

It is known that once his jokes were so funny that he almost caused a plane to crash. One of the pilots said that he had to land a plane because it was becoming critical as they weren’t able to keep the plane even. Ron White’s net worth is estimated to be around 40 million dollars, and it keeps growing as he is still performing all over the country. His famous book had a significant role in his net worth, as well as his ownership of the OMG. On his website, he also has various things for his fans, and since almost everything about him and his stand-up comedy is about drinking, he is an endorser to the tequila brand – Number Juan Tequilla.
One part of his income is, of course, the social media, where he has a large number of followers. He uses those platforms to promote himself, but also to amuse people and to advertise famous brands. A certain number from all money gained that way, also goes to various charities.

This famous comedian was married three times, and the son, his only child, came from his first marriage. The end of his last marriage was in 2017 when he divorced a famous singer Margo Ray, but Ron White added that they were never married in the first place. The Texas judge had a different opinion and declared that they were married by Texas law. Ron White is known as an easy living guy, who sometimes has trouble with the law. The latest incident happened in 2017 when he was arrested for possession of marijuana in Florida. Ron White’s career began suddenly and unexpectedly, but the person with that kind of charisma always finds his way to the top.

Today, Ron White intends to continue working what he loves the most, and for the foreseeable future, and he is even planning to write another book. His main comedian act throughout his career is mostly anecdotes from his personal life, but the way he tells them made him who he is, a living comedian legend. There are no rumors regarding his 4th marriage yet, but with Ron, we never know, and he may surprise us once more in the future, he is just 63. One thing is sure we can always expect the unexpected from Ron.