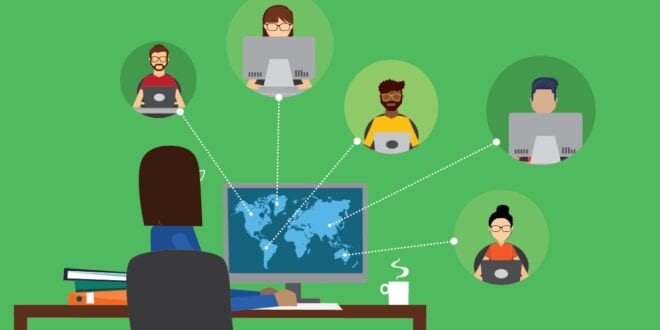 Benefits and Drawbacks of Hiring a Remote Software Development Team

People often get excited about hiring developers remotely, but their enthusiasm can rapidly fade away after facing some complications inherent to the process. To raise productivity and efficiency, teams use best organizational practices, such as the Scrum framework. For those evaluating such a possibility for their software project, let’s analyze the major benefits/drawbacks of using a remote Scrum software development team.

Being the Agile branch, Scrum software development methodology postulates an iterative approach to the software building process. A team usually has a size from 3 to 9 people that has to be cross-functional to cover the defined single goal in one such iteration, or cycle – a Sprint. During a Sprint, it may be necessary for the team members to share or acquire the knowledge needed to achieve the goal, which is regarded as an initial part of the work process. Rapid changing of the webspace brings diversity in frameworks and environments that greatly decreases the chances of finding the developers possessing compatible skills right away.

Moreover, they have to be also psychologically consistent, Scrum trained and disciplined to power-up a self-managing Scrum team. Having to delay actual work on a particular project until formation or finding the team with the skills necessary for it, is a drawback. However, this could be beneficial in the long run as it allows us to deal with the self-sustaining team, perfectly matching the project and each other.

In Scrum, management is never an end in itself. That is why remote teams are focused on the Sprint Goal achievement rather than strictly abiding by the everyday 8 a.m. to 4 p.m. working day. This could be challenging for some managers and developers used to the traditional paradigm. Scrum also encourages the major project goals adjusting in the process, and it may be stressful for team members to pay attention constantly to the goal renewals, especially if the stated goal is vague. To keep this feature beneficial, stakeholders and the team need to share a thorough definition of the goal and a clear understanding of what the “goal achieved” means.

For a remote team, communication is of utmost importance, while spending too much time communicating is the last thing you want to do. Having to discuss roles and responsibilities, project details, and accept replies about the job done may seem an easy part for the Product Owner (the person in charge of defining how the software has to look). In real life, though, it becomes an overwhelming duty, stealing time from actual work. Recent studies show that video presentations can be even more stressful than offline, and too much engagement in these activities gets developers tired faster.

To prevent this, Scrum suggests the leveling of communications, splitting up internal (frequent, within the team) and external (between the team and Product Owner or client). The Scrum Master, who performs everyday leading duties, has to be proficient in everyday management and communications, so in top remote development companies, there are always professionals to fill that role. They can even control and facilitate the process locally if the team is set up in one place and is remote only from the client’s perspective, like if business from the US hired developers from a large city in Ukraine (which is a good idea to do, considering the cost savings).

The developers’ reliability is crucial for the clients dealing with valuable personal data from customers or needing the tangled software to be refreshed while staying fully functional. Having few teams working on the parts of the same project means you as a client has given to each only the small piece of access, so any information, necessarily gained in the process by programmers, isn’t full enough to cause trouble even if leaking. It also prevents you from risks of the delivery of the update postponing, related to the developers’ problems with health, family, or other personal issues, as team members observe and help each other in solving such problems when they appear.

However, there still can be someone turning to be unfair and feeling protected by the physical distance between him and the teammates or the client, but typically working in a team means possessing a certain level of personal values and ethics. Teams and companies, working for a long time, do have undoubtedly good business ethics, as they have survived the long process of competitive selection at this market. That is why developers hired remotely and in a group are usually even more trustworthy than individuals, both offline or remote could ever be.

Scrum services also present the methodology of dealing with developers on a high level of control, which minimizes the possibility of facing security problems.

The Sprint duration is from a week to a month, which comprises certain stages of the releasable increment creation. Each Sprint has its place in the general plan of software development following the Project Backlog, but potentially after each delivery, the team is free to go. This doesn’t happen often, but speaking of short-time partnerships, in the flow of different projects some teams may face a reduction in motivation, as members can’t relate to what they currently do. This has a crashing impact on successful work and software release. Keeping a productive team that accumulates project and domain knowledge is often essential for long-term project success. It makes sense to inform the development team of the larger picture of where the project is going. On top of that, it helps to have the team reassured that the business relies on them to drive the project forward in the future.

To maintain the effectiveness stemming from identification and the right communication, developers become part of remote development companies, such as Brightgrove.us. Its team management provides a scrupulous selection of developers by skills and proficiency levels, assessment and assistance in the process of software building, and Scrum tools usage for performance control.

At the end of the day, software development outsourcing is the inevitable future of development. Knowing possible drawbacks, one can cope with them more effectively, experiencing only the beneficial side of remote software building. You can hire professionals at bizop.org.

Previous Garden Hot Tubs – What You Need to Know
Next What To Present A Car Enthusiast?