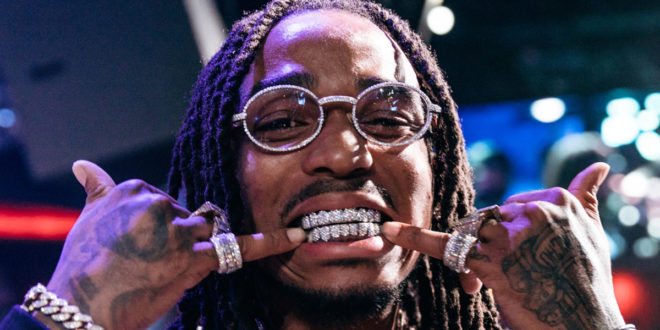 Quavo is a member of Migos, a hip hop and trap trio Migos, together with his relatives Takeoff and Offset. He is Takeoff’s uncle and Offset’s cousin.

Born in Athens, Georgia, as Quavious Keyate Marshall, on April 2, 1991, Quavo grew up in Gwinnett County, close to Atlanta. All three members of Migos were raised by Quavo’s mother, Edna Marshall. She was a hairdresser, while Quavo’s father died when he was four.

Quavo’s a starting quarterback for his high school football team during his time in Berkmar High School. Just one month before graduation, he dropped out without finishing high school.

Quavo, Takeoff, and Offset formed Migos in 2008. They were first named Polo Club, but later changed the name. They published tow mixtapes, Juug in 2001 and No Label in 2012. They first hit came in 2013. It was a single called Versace, which was later remixed by Drake. The success of Versace brought them a contract for their first studio album Yung Rich Nation, published in 2015. It reached 3rd spot on US Rap chart and fifth on the US R&B/Hip-Hop chart.

In 2018, Quavo published his first solo album, titled Quavo Huncho. In an interview for GQ, he said: “I’ll learn from my fans when I drop my album. I’ ma just work hard, being the hardest-working person on everything, leader, the Huncho, so that’s what you already know what you got coming. I need answers from my fans now. I can’t answer anything.”

Quavo’s fortune doesn’t come just from the music. He has several successful projects aside. One of them is a partnership between Migos and sports apparel company Finish Line. Migos are, however, his biggest income source. From September 2017 to September 2018, the group earned $25 million. In just 12 months, they appeared at 93 concerts. Quavo net worth currently is $16 million.