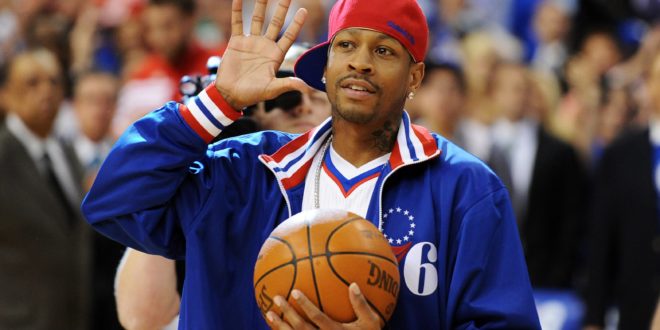 Allen Iverson is an ex-NBA player who had a very fruitful career and played for 14 years as both a shooting guard and point guard. This former NBA player is regarded as the 5th best shooting guard of all time by most people but is also famous for his life outside of the court. His finance has been a subject of discussion since it is far from what it used to be. Let’s take a look at all the ups and downs of Iverson’s life and his current net worth.

He was born in 1975 and his full name is Allen Ezail Iverson from parents Allen Broughton and Ann Iverson, he’s from Virginia.

Lines.com reports he went to Bethel High School where he joined the basketball team and let to a championship. He was arrested and was supposed to spend 15 months in prison but served only five after which he attended Richard Milburn High School. He got a scholarship from Georgetown University where he played basketball. He married his high school girlfriend Tawanna but there’s a rumor that he threw her out of the house. Right now he has five children with his ex-wife whom he divorced in 2010.

Allen Iverson started getting some recognition for his skill after he won the Big East Rookie of the Year award and was First Team All-America after being the leader of the Georgetown University basketball team and winning them the championship.

Be yourself, everyone else is taken!!! Thank you @playerstribune. Link in bio pic.twitter.com/h9bmVBgO9r

He spent two seasons playing basketball at college but in 1996 he was drafted by the Philadelphia 76ers. He helped the team improve by leaps and bounds before he came they had a record of 18-64 and by 2001 he led them to the NBA finals where they to the Los Angeles Lakers 4-1. In 2006 he left the Philadelphia 76ers and is still the leading scorer of that team.

In 2007 Allen Iverson signed with the Denver Nuggets where he stayed for two years before joining the Detroit Pistons. In 2009 he signed a one-year contract with the Memphis Grizzlies before going back to the Philadelphia 76ers in the 2009-2010 season. The last time he played was in 2011 for Besiktas, but after that, he retired in 2013.

Allen Iverson was an amazing player and at the end of it all, he finished with 24,368 points and an average of 26.7 points per game. He has a lot of awards and achievements to his name, some of which are Hall of Famer Class of 2016, he won the MVP award in 2001, he was NBA steals leader three times, two-time NBA All-Star Game MVP, he was the NBA scoring champion 4 times and he was an 11-time NBA All-Star.

His net worth comes up to around only $1 million right now. There are rumors going around that he is broke and how he managed to spend all the money he has earned from his NBA contracts which amount to around $150 million. We know that he was never shy with his money and spent a lot of it on his mother and friends. Things like expensive cars, houses, jewelry, very expensive vacations and many more.

Tickets are on sale at https://t.co/HxT7wOttng April 24-26th at Souderton Area high school in the Philadelphia Metro Area!!! pic.twitter.com/tzqLrAW2Fo

He still gets money from his lifetime deal with Reebok, $1 million each year to be exact. They also set up a trust fund for I which he can open when he turns 55 years, so $32 million waits for him there.

Allen Iverson is an NBA legend but is also a cautionary tale for future NBA players and people in general, to be careful with their money and how they act in the public.