A nation’s police force can be considered its “face.” To keep appearances positive, the authorities should take care of the police equipment, including cars. Speaking of the vehicles that are used by law enforcement, they are usually adapted to the local conditions.

That’s why you can find both SUVs and expensive supercars in the auto fleets of the police in different countries. A separate category is “image cars” that show the country is wealthy. Some countries want to emphasize the status of law enforcement agencies.

Others care about the environment and use eco-friendly vehicles only. Let’s discover the best police automobiles around the world. 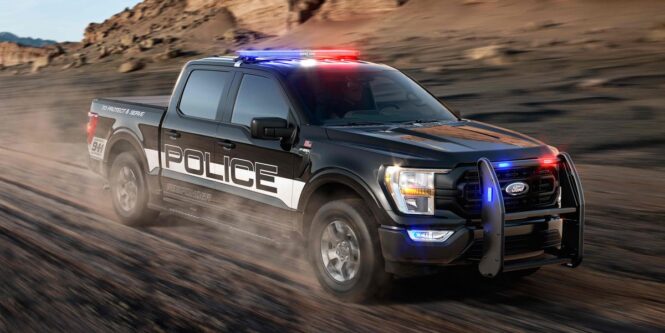 In 2017, Ford prepared the F-150 pickup version for the off-road pursuit of offenders. The car was intended for the US police. The Ford pickup has successfully passed the tests of the police department in Michigan. Following that, the manufacturer was granted permission to begin delivering the vehicle to all police departments in American states.

The Lykan HyperSport can be called the most exotic police car in the world. The Arab company W Motors was engaged in the development of the supercar. This is the first hypercar designed and built in the Middle East.

The pre-production car version was presented in 2013 at the Qatar Motor Show. The total circulation of the series was only seven copies, auction cars, which many car lovers were looking for. At the same time, only two Lykan HyperSports have been sold, according to verified data.

In 2016, the Tokyo police received a few powerful Nissan 370Z vehicles, prepared by the Nismo studio, to reach speeders. The rear-wheel-drive coupe is equipped with a six-cylinder gasoline engine that has a volume of 3.7 liters and a capacity of 350 hp.

The automobile can have a 6-speed mechanical gearbox installed in tandem with a 7-speed automatic transmission that only adds to its power and performance. From zero to 60 mph, the Nissan 370Z accelerates in only 5.2 seconds. The maximum speed is 155 mph (ca. 249 km/h).

A few years ago, the Australian police received a powerful Mercedes-AMG E 43 sedan for their car fleet. The law enforcement officers nicknamed the new car Guardian V2 and noted that they chose it, among other things, to demonstrate the benefits of modern safety systems and assistance to the driver. The sedan, for example, has the function of semi-autonomous control.

The Mercedes-AMG E 43 has a 3-liter engine with a capacity of more than 400 hp. The engine is paired with a 9-speed automatic transmission and accelerates the all-wheel-drive car to 60 mph in 4.6 seconds.

The famous German studio Brabus built a fully equipped SUV based on the Mercedes-Benz G 63 AMG, entirely for the Dubai Police. The all-terrain vehicle has a 5.5-liter engine, the power of which was increased from 544 to 700 hp.

The Gelendwagen from Brabus can accelerate from 0 to 60 mph in less than 5 seconds. The maximum speed of the SUV reaches 150 mph (ca. 241 km/h). In addition, the novelty received a new body kit, a performance exhaust system with chrome nozzles, and a suspension with two tuning options.

A few years ago, the German police received a well-equipped Chevrolet Corvette. The engineers installed a carbon aerodynamic body kit and 20-inch wheels on the sports car. In addition, a police walkie-talkie appeared in the cabin.

The engine didn’t undergo any changes. There is a 6.2-liter engine with a capacity of 466 hp under the hood. Paired with a 7-speed mechanical transmission, it accelerates the Corvette from zero to 60 mph in 3.8 seconds. 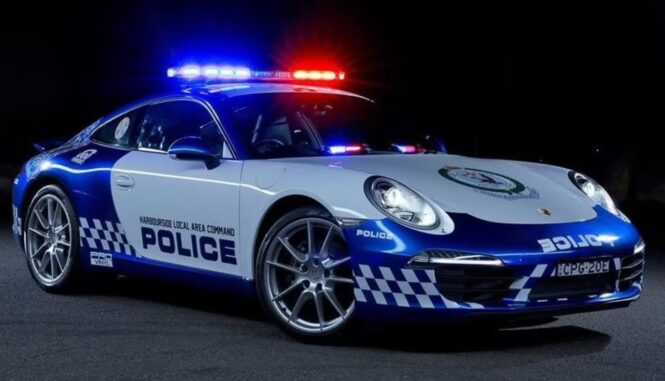 In 2017, Porsche handed over the 911 sports car configuration to the Austrian police. The police received the basic modification of the Carrera model. It’s equipped with a 3-liter engine that has a capacity of 370 hp.

The car accelerates to 60 mph in less than 5 seconds. The car received a recognizable color scheme with dark, blue, and red elements, as well as an LED panel on the roof. In addition, the vehicle is equipped with a radio station.

They are highly advanced and equipped automobiles used by law enforcement professionals to ensure safety on the roads and enforcement of laws. Not all police cars are alike, but they all possess certain advantages that make them an excellent tool in the fight against criminal activity.

One of the main advantages of having a police car is its excellent maneuverability. They often employ powerful engines with advanced suspension systems to provide optimal handling.

They also offer good visibility and space for storing equipment, allowing officers to travel quickly and safely without interfering with each other.

Police cars also have several additional features installed to help officers do their job better. Most modern police vehicles include lighting bars that provide instant warning for other drivers as well as armoring to help protect officers from gunfire or explosions.

More advanced vehicles may offer up even more capabilities such as 360-degree camera coverage, onboard computers, and other technological additions designed specifically for law enforcement purposes.

Lastly, their enhanced safety features make them a must-have for law enforcement officers who spend long hours in their patrol vehicles each day protecting the public from life-threatening situations both expected and unexpected.

Safety is an important part of any vehicle’s appeal, especially when it comes to those who depend on their vehicle while they are serving in tough circumstances on the roads or traffic stops – making sure they arrive home safe every night is paramount!

You can find a lot of powerful, fully equipped, and expensive police cars all around the world.

Along with reaching speeders, they also aimed to impress the country’s visitors and show how rich it is. Automakers also have their benefits in presenting their most powerful vehicle models, which are used even by police.

And, of course, the police officers themselves are always happy to sit behind the wheel of such exciting automobiles!

Previous How Does A Fused Disconnect Switch Differ From A Circuit Breaker?
Next Where Can You Use Digital Wireless Microphones in 2023? 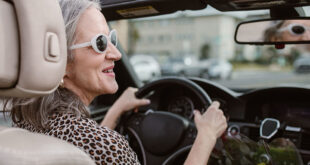 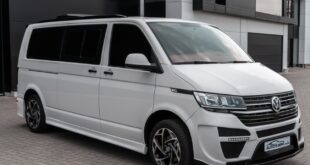 7 Ways to Save Money on Your Next Minivan Rental