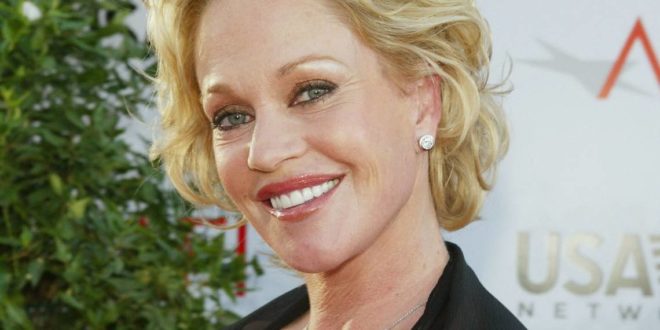 A popular actress, Melanie Griffith, is someone who started from the bottom and rose to one of the most popular actresses in all of Hollywood. During her turbulent life, she had many ups and downs, regarding her professional and private life, but ultimately, she succeeded in overcoming all of those things.

The one thing that helped her with issues in her life, is her high-level of determination. Because of that, her net worth had a significant increase over the years. Now, we will give you a little insight into her private life, career, and her net worth. Ready, set, go!

She was born in Manhattan, New York, on the ninth of August 1959. Her parents are Peter Griffith, an advertisement executive, and Tippi Hedren, an actress. They divorced when Melanie was only four years old. She ended up to live with her father in New York. However, she frequently visited her mother who lived in Antelope Valley, California.

Melanie Griffith has a paternal half-sister, Tracy Griffith. During her childhood, she was a model, but she stopped going because of her shyness. In the teenage years, she started attending professional school in Hollywood. She was a great student and graduated when she was sixteen years old. She is a member of the Democratic Party of the US.

She had four marriages, but she was married two times to a single man, Don Johnson. They were married in 1976 and divorced that same year, and from 1989 to 1996. She married Steven Bauer in 1981, and their marriage ended in 1989. Last but not least, she was married to Antonio Banderas from 1996 to 2015. She has four children, and one of them is an actress Dakota Johnson.

Even though she started acting in 1969, her first big role was in “Night Moves” that was released in 1975, where she had some nude, explicit scenes. Movies she starred in the next few years had a somewhat similar role for her, like one in the “Night Moves”. She appeared in “Drowning Pool” and “One on One”.

In 1981, while she was on the set of “Roar”, she was attacked by a lion, which had the result of fifty stitches on her face. She spent the next few years battling alcohol and drug addictions, but in 1984, she starred in “Body Double. The role in this movie earned her a National Society Award in the best-supporting-actress category.

During the next few years, she appeared in several successful movies like “Something Wild” and “Working Girl”. Also, she made an exceptional appearance in a tv show called “Buffalo Girls” in 1995, for that role she was nominated for a Golden Globe. In 2003, she had her debut on Broadway, with the musical “Chicago”. More recently, she starred alongside Al Pacino in “Pirates of Somalia”.

Melanie Griffith is probably one of the richest actresses in Hollywood. Only her home in LA is worth more than five million dollars. Other than that, she has various types of luxurious cars, yachts, and other types of vehicles in her ownership. Besides her job as an actress, she earns from endorsements various products. Her net worth is $30 million.

Previous Things to do in Findlay, Ohio in 2023 – Travel Guide
Next 6 Pros and Cons of Renting Service Apartments in 2023