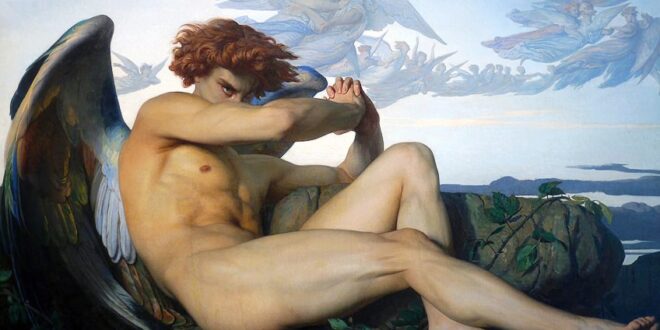 In almost every religion that has ever existed, there have always been stories depicting the character known today as the devil. From culture ancients to modern-day religions such as Christianity, Judaism, and Buddhism, evil and resisting its temptations is one of the central teachings.

With Christianity in particular, there has been the most comprehensive collection of drawings depicting the appearance of the Devil. The images of Lucifer and his dimension of hell were used throughout history to put a face on the evil and to keep people on the path of purity.

As a result, much of European art throughout the centuries was dominated by images of a religious nature. With that being said, let’s take a look at some of the most famous Lucifer paintings from Medieval Christian Europe and the motivations behind them.

Orpheus Sings For Pluto And Proserpina – Jan Brueghel, The Elder

In Greek mythology, multiple Gods depicted the various aspects of darkness that would later be grouped together into the identity of the devil. There was Moros, the god of doom. Thanatos, the god of death; Hades, the god of the underworld; and Prometheus, the supreme trickster.

All these individual traits would later be combined into one entity in Christianity, known as Lucifer or the Devil. Perhaps the most common theme between Greek mythology and Christianity artwork is the depiction of the realm of Hell.

The lavish showcasing of the domain of Hell was a common trope throughout the Renaissance period, and many artworks depict the horrors contained therein. Jan Brueghel, the elder’s depiction is arguably the best and most detailed. It is filled with fire, demons, and unfortunate souls sent there to be tortured.

Saint Michael vanquishing the devil and casting him out of Heaven was a popular theme throughout the medieval and renaissance age. There have been different paintings dedicated to the scene by many of the period’s best artists.

Italian High Renaissance master Raphael’s rendition of the scene is considered one of the symbol’s original inspirations and one of the very best. In the painting, archangel Michael stands on the top of the Devil’s back, ready to drive a spear into him.

This devil painting is meant to act as the symbol of good triumphing over evil. In Christianity, evil and the devil are something that must be destroyed completely to reach Christhood. Michael Vanquishing Satan is such a powerfully important image that Raphael, among others, painted it more than just once.

The Temptation Of Christ By The Devil – Peter Paul Rubens

Peter Paul Rubens is perhaps the greatest Biblical-themed painter ever and was certainly the prolific Christian painter of his time. As well as Christianity paintings, Rubens was interested in Greek mythology and painted many masterful mythology paintings from both religions.

The Temptation of Christ by the Devil is one of the most iconic and important parables in the Bible. It tells the story of how Jesus Christ was approached by the Devil, who tried to lead him into temptation and turn to sin.

Ruben’s incredible scene drawing is both immaculately detailed and strikingly eye-catching. This story is among the most central to Christian values as even Jesus was not above being tempted, but thanks to his faith, he resisted his temptations and showed his followers the path to be able to do the same.

The Last Judgement is a fantastic heaven and hell-themed piece attributed to Flemish artist Hans Memling. It depicts in great detail the epic last judgment scene and the second coming of Jesus Christ as spoken about in the Christian bible.

As it is a triptych, it is technically three different paintings split up into three different sections, telling three different yet connected stories. In the center panel, the Lord Jesus is sitting in heaven judging the world below while the archangel St. Michael separates the souls of the earth and drives the sinful ones down towards hell.

The panel on the left depicts St. Peter at the gates of heaven accompanied by the angels as they welcome the pure-hearted into heaven. The panel on the right shows the harrowing scene of those guilty of having wicked hearts being punished for their evil ways and being dragged down to hell, where they will be punished forever.

Although the image of the Baphomet is technically not from the Renaissance period, it is by far the most iconic depiction of the Devil still alive in our culture today. Furthermore, this version of the Devil is one of the most hideous and terrifying ever conceived.

The version of the devil sees him not as a fallen angel or resembling humanity in any way. Instead, the Baphomet is depicted as grotesque and intimidating, with the head and hooves of a goat, dark wings, and both male and female anatomy parts.

This drawing can be viewed as the final evolution of a creature that has existed in human civilizations for thousands of years. Some have claimed that the Baphomet is not an image of evil but a representation of balance, being half-man, half-animal, half-male, and half-female. However, if you were unlucky enough to run into this creature, you’d surely be terrified by its horrifyingly evil-looking appearance.

As the ultimate antithesis of good, the devil’s image has played a significant role in Greek and Christian mythology paintings for centuries. Even after religious influences on art had ceased, the terrifying image of the devil remains a prominent figure in our culture today.

Previous What You Should Know About New Brunswick Driving Laws?
Next Here Are Some Surprising Facts about Dance Shoes and Their Importance