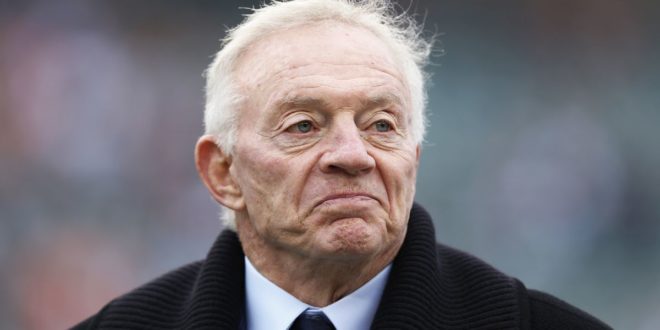 Elvira 08/02/2021 Business, Entertainment, Net Worth, Sport, Style Comments Off on Jerry Jones Net Worth 2023 and Other Facts About the Billionaire Sports Owner 400 Views

Jerry Jones, the American billionaire businessman and owner of the National Football League (NFL)’s Dallas Cowboys, is considered to be one the most controversial sport’s owners ever. He is the owner of the Dallas Cowboys since 1989 and he is probably the main reason the team has achieved glory and amazing Super Bowl victories. Hence, here is how much is Jerry Jones’s net worth and other facts about him you might find interesting.

Jerry Wayne Jones was born on October 13, 1942, in Los Angeles, California. He spent his childhood in North Little Rock, Arkansas where his family moved. He is the son of J.W ‘Pat’ Jones and Armenia Pearl Clark Jones. He was enrolled in North Little Rock Higher School. He used to play football while he was in high school and became the co-captain of Arkansas.

Then, he and his team won the national championship in 1964. As soon as Jerry graduated, he moved with his family to Springfield Missouri and his father became the President and Chairman of ‘Modern Security Life’ Insurance company. Then, he studies at the University of Arkansas.

While Jerry was at university, he met his future wife on a blind date. He married Eugenia ‘Gene’ Jones in 1963 and they have three children, two boys and one girl. Each of his children has an important position in the ‘Dallas Cowboys’ franchise.

As soon as Jerry graduated from university, he started working at his father’s insurance company as the executive director. However, as he chose to complete his masters, he missed the opportunity to buy the AFL team. So, after finishing post-graduation in business from Arkansas, he founded Oil and Gas Company in Oklahoma, which began to expand rapidly.

Hence, in 1989, he finally bought the ‘Dallas Cowboys’ team for $140 million. The previous owner of the team was H.R. Bright and the team wasn’t very successful under his ownership. However, as soon as Jerry purchased them, the team started making significant results and soon became the best NFL franchise of the 1990s. In fact, the Dallas Cowboys won the Super Bowl for two consecutive years and then made a comeback to win the Super Bowl Winners title again in 1995.

Definitely need to get this signed by Jerry! Just need to be patient, he signs eventually. Can’t wait for Camp! #jerryjones #dallascowboys #dallascowboystrainingcamp #HOF #cowboysnation

As a co-captain of the Arkansas team and an owner of the Dallas Cowboys team, Jerry Jones has received a number of awards. So, he received the FWAA College Football National Championship award as a co-captain in 1964. Then, he was awarded by outstanding team ESPY in the year 1993 as the owner of the team. Then, in 1995 the ‘Financial world’ Magazine presented him as the owner of a most valuable sports organization. In 2013, he was honored by the Horatio Alger award and in 2014 as the NFL executive of the year. In 2017, he was admitted to the Pro Football Hall of Fame.

Jerry Jones’s net worth is estimated to stand at $7 Billion. Most of his wealth comes from the football team and his business endeavors. Hence, thanks to his incredible wealth he can lead a very comfortable and luxurious life.

Some Interesting Facts About Jerry Jones

Jerry has been known and criticized for his bold decisions. So, we decided to share some interesting facts about Jerry Jones which you probably haven’t known about until now.

Jerry Jones might not be liked by everyone, but he is definitely one of the most effective owners in the NFL franchise. He might be mysterious, but his achievements and awards speak for themselves. Thanks to his bold decisions and entrepreneurial skills, his team has achieved glory and amazing Super Bowl victories.

He became the sixth richest NFL owner in the world. Last but not least, it was thanks to Jerry, who played a crucial role in securing the broadcast deal between the NFL and Fox, which brought NFL glory and money. So, he seems to be the reason why the NFL has become so rich.