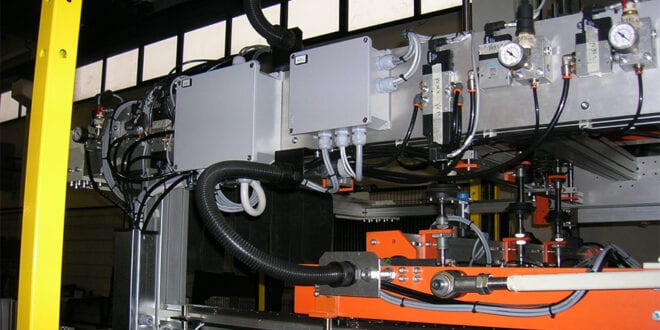 This blog will go in-depth and describe how industrial pneumatic systems work. There are five types of components that represent the most common elements used in these systems. Then, the ultimate goal of the collection of components is to create motion in an industrial setting. Pneumatics is one of the most widely used technologies to automate repetitive processes. This common application is integrated to move product from one place to another.

Furthermore, pneumatics is used to press or clamp pieces of a product together. To understand how pneumatic tube systems work, let’s start at the beginning with the compressor and following the process to motion.

FRL is short for filter regulator and lubricator, which are common pieces that make up the air preparation unit. Typically the first unit in the air preparation system is what’s called a bulk liquid separator, which circulates or spins the air using specially shaped vanes. The rapid circulation of the pressurized air sheds unwanted moisture due to centrifugal force.

The next unit is a filter, which further removes particulates and moisture in a two-stage process. This process is very similar to the bulk liquid separator, and it has a series of vanes or louvers in the filter that circulates the air in the first stage. In the second stage, the air passes through a screen called an element to catch unwanted debris. Once it’s dried and clean, it will be adjusted to the level of air pressure coming out of the compressor.

This adjustment has an impact on how much force the system generates. Higher pressure allows the actuator to put out more force. Then, lower pressure creates less force. The regulator achieves this by using a spring-loaded assembly. The knob on the regulator adjusts the force of the control spring to achieve a desired pressure set point. Once the downstream pressure level drops lower than the desired setpoint, the poppet or internal valve opens a pathway for the higher pressure upstream to float downstream.

This continues until the pressure in the system reaches the regulator set pressure. At this point, the poppet or internal valve closes until there is a new downstream demand. It’s also common to have a pressure gauge on a regulator so the user can monitor the downstream pressure.

Finally, in specific applications such as air motors or pneumatic tools, a lubricator can be added to distribute a fine mist of lubricant into the compressed air to help lubricate downstream components. Now that the compressed air is clean, dry, and set to the proper pressure for the application, the next step is to direct it where to go to create motion. A directional control valve is used to achieve this task.

This directional control has a series of internal pathways that can connect the air into the inlet port with one of two avenues to leave the valve called working ports. Depending on the position of the moving elements, which is typically called a spool. The air will be blocked from traveling down one pathway and allowed to go down the other. The high spots on the spool called lands will prevent the air from proceeding down one path, while the lower sections on the spool called grooves will allow air to flow around them and process to one of the working ports.

In this common type of valve, the unit is not activated. Then, the spool is forced to the left side of the valve by a spring. In this position, you can notice that this land blocks air from going out of the working port and instead goes out a different working port. This happens because the grooved lower section of the spool allows air to flow past it and out to the working port.

In changing the direction of the air to a different port, the valve needs to be turned on. In most automated equipment, a PLC or programmable logic controller will instruct the valve to shift using an electrical signal. When the signal arrives at a portion of the valve called a solenoid coil, a magnetic field is created that pulls the centrical piece called the plunger towards it. When that plunger is unseated, it allows air from inside the valve known as pilot pressure to push the spool to the right. Once the spool reaches the far right side of the valve, the lands or highspots are now closing off the passage to the second working port.

Instead, it will direct the compressed air to flow to the number four working port. When the signal from the PLC has removed, the force generated by the electromagnet is also removed. Then, the spring on the plunger returns it to a normal state. This eliminates the air signal that is pushing on the spool. The spring on the opposite end will return the spool to its default position once again.

The piston is connected to a rod that will extend. As a result, the force generated by the compressed air acting on the piston. The actuator will continue to move in that direction until it reaches its physical limit.

Pneumatics are used to press two components together in an assembly process to help form the pneumatic tube system. Through the combination of the air preparation, valve, and actuator products, there’s a wide range of applications that can be solved. If you need a pneumatic carrier for your hospital, contact Washington Security Products. This pneumatic tube carrier provides your hospital with cutting-edge technology. For more information, visit Washington Security Products.