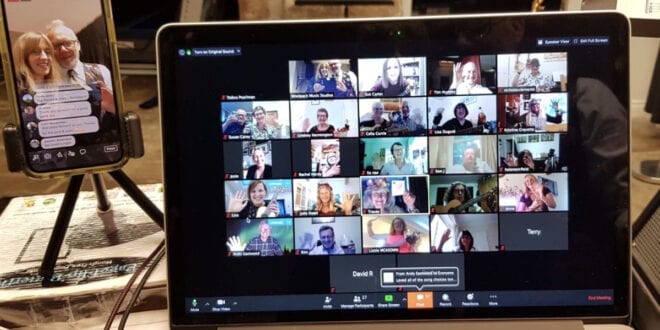 The Future of Online Streaming

Advancements in technology have transformed aspects of daily life in recent years, and that is certainly the case with regards to how people access broadcast content.

It wasn’t too long ago that people were reliant on traditional television and radio services, but the arrival of satellite networks changed the landscape in that respect.

Things have moved on significantly since then, with streaming services becoming the ‘go-to’ medium for millions of people around the world.

The shift towards streaming is expected to continue, with industry experts predicting that the sector could be worth around $167 billion by 2025.

Convenience is the name of the game where streaming is concerned, with the services making it easy for people to watch what they want when they want on whatever device they want.

A great example of this is in the sport of soccer, and you can click here for the wide variety of soccer streaming sites that are available for soccer fans across the world.

With subscription fees making streaming services a cost-effective alternative to traditional outlets, it is easy to see why they have such widespread appeal.

Read on as we look at the future of sports online streaming and find out what experts have been saying about those developments.

An author of multiple books on the Chinese influencer industry and technology platforms has predicted that Asia could soon become the global leader in technology.

Silicon Valley in California has historically been viewed as the driving force in tech, innovating in areas such as streaming services and household shopping sites.

However, the recent emergence of TikTok and other Chinese digital products have the potential to transform the tech sector.

The market in China is highly saturated, meaning that innovators there must be willing to seek out other opportunities if they wish to be successful.

Jian Lin, assistant professor at the University of Groningen, says that China is increasingly targeting overseas markets with its technological developments.

“They want to give international users the impression they are not Chinese platforms, but global platforms,” Lin told the BBC.

“They really want to transmit this impression to the public that they’re not necessarily Chinese. They’re just like others, a global platform.

“I do believe Chinese companies will become even more ambitious and stronger in the coming years.”

Streaming Aggregation on the Agenda

New Lancashire Cricket Club chairman, Andy Anson, believes that the sport must aggregate its digital rights to flourish in the future.

The Red Rose county demonstrated the power of online streaming during the summer, receiving more than 2.5 million views of their games on YouTube and Facebook.

Counties currently run independent streaming services, but the quality of these often varies due to the differing levels of investment in the technology made by each club.

Anson, who previously worked for Manchester United and the ATP World Tour in Europe, says that the sport at the county level must find new ways to engage with fans.

“The whole of county cricket can come together to start promoting that kind of content more effectively, and targeting the communities that are out there,” he told The Cricketer.

“There are a lot of latent cricket supporters who aren’t getting the message at the moment and aren’t viewing county cricket, and a lot more can be done to target those audiences.

“If the ECB can at least start bringing people together on a platform, or creating a platform people can use, or sharing best practice but also trying to build a bigger cricket community.

“By aggregating everyone’s content rights, you can have a much stronger proposition and take advantage of digital media platforms to really reach communities which are traditionally hard to reach.”

“That kind of thinking has to start happening in cricket so we can start aggregating audience in the most effective way.”

Some sports have already leveraged online streaming to great effect – a point highlighted by the continued expansion of the World Snooker Tour (WST).

The organization recently agreed to a new long-term deal with IMG ARENA to extend its partnership for live streaming rights for the betting industry.

Snooker has grown rapidly over the past few years, particularly in Asia, where a new wave of young talent has taken the sport to new heights.

Link-ups with the gambling sector have repeatedly been proven to boost the profile of other sports, and snooker looks sure to benefit from the new arrangement.

WST Chairman, Barry Hearn, said: “We are delighted to extend our agreement with IMG ARENA. This is a perfect match between two businesses with a shared vision for the future of our sport and enthusiasm for creating new opportunities.

“We have worked with IMG for many years on various aspects of our sport and we admire their professionalism and intelligence. Snooker continues to develop as an outstanding property and we have long-term ambitions for further international expansion.”

While the sport has made significant moves towards leveraging live streaming to its advantage, the music industry is yet to jump on board fully.

Most people use online streaming to listen to music, but very few artists have worked out how to monetize live streaming services properly.

Touring has been the primary way for musicians to make money in recent years, but streamed concerts have the potential to shake up the industry.

Amaechi Uzoigwe, manager of hip-hop stars Run The Jewels, believes that live streaming will explode in the music industry.

“What we’re seeing now is 1.0, what you’re going to see next year is there’s tremendous innovation happening in the DNA of the technology,” he told Music Ally.

“There’s no real revenue, but that will change next year. It gives artists and managers and teams options in the future.

“Do I need to spend six weeks on the road to make some money, or can I do it in one night?”