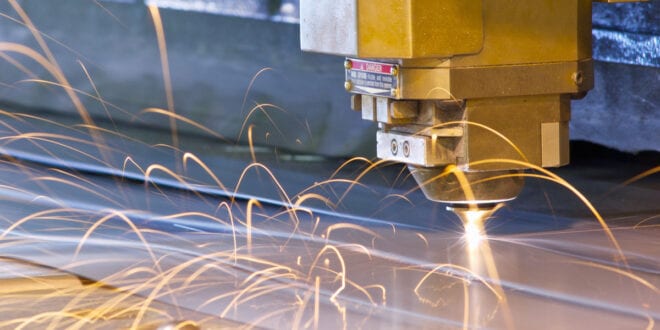 When it comes to high-powered fiber laser cutting machinery, the room for improvements is huge and right around the corner. The future of such technology can easily be summed up with a few words – “Fiber laser cutting technology is seeing a rejuvenation as newer models are built better and to be more efficient.”

But what can we thank for this technological breakthrough? It seems as many manufacturers think differently when it comes to it. Some speak excessively about direct diode lasers (DDL), others bring the point of faster and more efficient cutting speeds, while a third group mentioned the increased power consumption efficiency of these machines.

But all in all, the future is very bright and will have a huge impact. So, we’ve decided to take a look at it and explain it to you. Without further ado, let’s start.

When it comes to fiber laser cutting machines, the method of cutting is different depending on the generation of the machine. But there isn’t a better method suited for the task than direct diodes.

This technology is based around a diode that is used for the cutting process. This method is so efficient that manufacturers can cut anything while only requiring 2000 watts of power.

This creates a sustainable power-consumption environment and one that will benefit manufacturers more in the long run. While these machines can cut through any fiber, they are so powerful that they can utilize power levels of around 8000 watts and cut through any type of metal.

This allows manufacturers greater levels of versatility and offers outstanding capabilities when it comes to cutting through any type of material.

But there is the real science behind it. Simply mentioning it won’t do our readers a favor, so let’s take a look as to why DDL is better than fiber, CO2, and disc technology.

The first benefit of using a diode as the method of cutting is all down to efficiency. When it comes to these machines, research shows that they are nearly 20% more efficient than other types of machines. To prove that we will have to take a look at the other benefits on the list.

This one is very straightforward as research shows that cutting speed is nearly 15% faster for diode powered fiber laser machines than its predecessors.

The third benefit comes in the form of higher-quality cutting. These types of machines are nearly 30% better when cutting fibers and metals. The high-quality cut offers manufacturers a significant advantage over their competitors that still use previous-generation machines. The cuts produced by diode-powered machines are superior compared to other sources.

This one is pretty much a guarantee when it comes to the future of fiber laser cutting machines. According to multiple sources, implementing these changes ( the ones mentioned above) will change the industry as a whole. With better machines, higher speeds, and greater efficiency ratings, the fiber cutting industry will be able to produce better goods, at a faster rate, and for significantly lower costs.

To sample some of these machines, the people over at DXTech offer their products for you to buy. Also, you can take a look at this fiber laser cutting speed chart and see how newer models differ from older ones.

Perhaps this is a technological change that everyone seems to be getting behind. Manufacturers always look for ways to lower operational costs, and a great way to achieve that is to buy the latest fiber laser cutting machines.

These machines are built to be fast, efficient, and to produce higher quality cuts. But one more thing that they’re built to do is to lower operations costs.

To put it simply, an improvement in technology has the potential to lower operations costs by nearly 30%. This is a significant number for any manufacturing facility that uses dozens of these units on a grand-scale production.

Automation is always the way to move forward. And while fiber cutting does see some degree of autonomous cutting, making improvements to make the machines cut on their own is a great benefit for the industry.

Automation is great for any manufacturer as it reduces labor costs. Not only that, but it reliefs people from having to work on these machines, and instead focus on other areas. Instead of operating, a manufacturer could simply employ experts to maintain and fix them as they break down.

With automation, a manufacturer doesn’t have to worry about standby time, intensity, and the margin for error is significantly reduced.

While we’re far from fully autonomous fiber cutting, there are clear and visible signs of what’s to come in the future.

Many of you don’t look at things in this way, but we’re well into the 4th industrial revolution of our time. And this time, there are a couple of players that will light the fuse that brings a great spark to our industries.

Currently, the biggest players in the fiber laser industry are Germany and China. Both countries are industrial powerhouses, with Germany focusing on efficiency and quality while China focuses on smart technology.

Regardless, both countries have made strides to improve and perfect the fiber cutting industry. With such dedicated hands on deck, we’re well set to ride the wave and see what brings to shore.

We might be already seeing some degree of automation, but these two powerhouses promise to perfect it. Efficiency is important, and what better way to focus on that than with smart technology?

The future of fiber laser cutting is certainly bright. With such revolutionary concepts currently being tested and tried, the future will bring more than automation and efficiency for world industries.

Certain elements such as cost-effectiveness, speed, and quality cutting are the areas that some focus on. Others focus on automation and efficiency and by bringing an overall better product on the market.