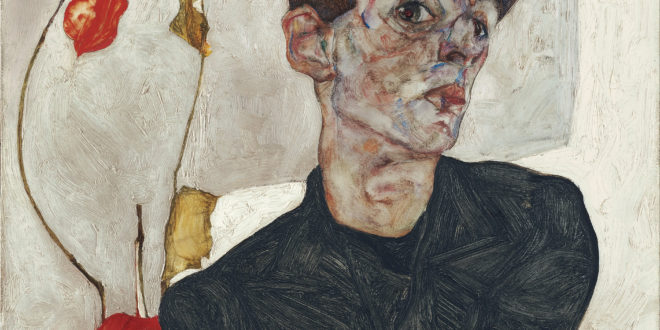 Born in Tulln, Austria on June 12, 1890, Egon Schiele was one of the leading figures of Austrian Expressionism, with his works being some of the 20th century’s most remarkable ones. Although his career was brief, he was an extremely prolific artist who is not only famous for his artworks, but also for an intriguing lifestyle that was marked with notoriety and scandals. He was on the verge of commercial success before his untimely death of influenza in 1918. He passed away just 3 days after his wife and was only 28 at the time.

Schiele enrolled in the Akademie der Bildenden Künste in 1906 but dropped out after three years due to frustration with the school’s conservatism. He was majorly influenced by Gustav Klimt which is evident in Egon’s earlier works. The two met in 1907 and Klimt not only became his mentor but his friend as well. Schiele formed his own movement, the Neukunstgruppe – New Art Group, in 1909, for fellow artists who wished to go in a different direction from the Academy’s conservative constraints.

By 1910, he had already developed his personal expressionist portrait and landscape style and began receiving numerous commissions from the Viennese intelligentsia. He left Vienna in 1911, seeking isolation, living in several small villages over time. From 1910 to 1912 he participated in various group exhibitions and had his first solo show in Munich, in 1913. He was drafted into the army in 1915 and continued to paint and exhibit prolifically during his military service.

His solo exhibition in 1918, at the Vienna Secession, brought him financial success and critical acclaim, although he was not able to enjoy it for long due to his death several months later on October 31, 1918.

His Art and Style

Egon Schiele produced figure paintings, portraits, and self-portraits that were psychologically and erotically charged, re-establishing the vitality of the genres with an unprecedented level of emotional and sexual directness. He replaced conventional notions of beauty with figural distortion, void of secondary attributes and his portraits often depicted subjects that were posed in nude in unsettling, revealing angles. From time-to-time, he gave his very personal artworks a more general, allegorical statement by using traditional motifs.

According to GlowInTheDarkPaint, he was an exceptional draughtsman and has created over 3000 drawings throughout his career, always regarding drawing as his primary art form. His artworks were characterized by emphasized contours, linearity, and graphic marks.

Being a highly prolific artist, he produced numerous works throughout his extremely short career, some of the most famous including Agony (The Death Struggle), Death and the Maiden, Portrait of Gerti Schiele, The Embrace, Self-Portrait in Orange Jacket, Sitting Woman with Raised Knee, Levitation, Self-Portrait Screaming, and many many more.

Although his life was short, the career of this controversial, unconventional artist was extremely profound and influential. He left behind a legacy that was not afraid to explore taboo subjects and his artistry hugely influenced many painters that came after. To learn more about this artist, visit meisterdrucke.

Previous What To Do When Your Brand Is Looking For Influencers
Next What is FR Outwear?