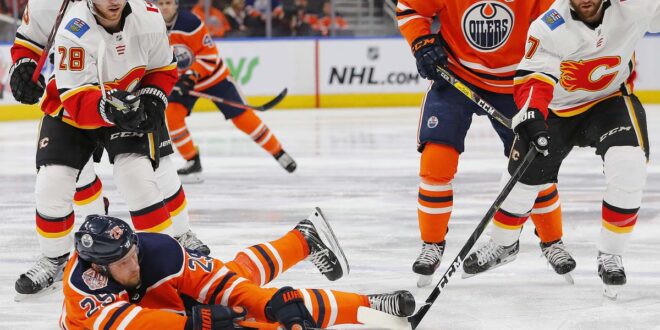 One of the most heated rivalries in the NHL takes centre stage on Saturday as the Edmonton Oilers and Calgary Flames go head-to-head at Rogers Place.

The 42-year-old spat had gone a little quiet in recent years, but reignited in brutal fashion last season due to an ongoing feud between Matthew Tkachuk and Zack Kassian.

The Battle of Alberta sparked back into life last January when Tkachuk rocked Kassian with two bodychecks that the latter player felt were dangerous.

The second hit knocked off Kassian’s helmet and he responded by attacking Tkachuk. The NHL Department of Player Safety ruled that both hits were legal and banned Kassian for two games.

The beef between the pair has continued since then, sparking plenty of angst between Oilers and Flames fans off the ice.

With the Battle of Alberta now back with a bang, this weekend’s clash could be a fiery affair given the latest state of play in the Pacific Division.

The Oilers are currently seventh in the standings, ten points behind the Vegas Golden Knights with five games in hand.

The Flames have also played five games fewer then the Golden Knights, but are just six points adrift of the table-toppers.

On that basis, both teams desperately need to something from Saturday’s game if they are to overhaul Vegas during the second half of the season.

According to Betway, the Flames are best placed to achieve the feat as they are priced at odds of 3.50 to claim top spot.

By contrast, the Oilers can be backed at odds of 9.00 to win the Pacific Division and can ill-afford many more slip-ups.

Edmonton blew a golden opportunity to return to winning ways last Saturday, throwing away a lead against the Ottawa Senators in the final period to fall to a 6-4 defeat.

The Oilers have gone 0-4-2 in their last six games and have won just twice in their last 14 outings. Given their current form, winning the division looks unlikely.

For the 22nd time in their last 26 games, the Oilers conceded the first goal of the game – a trend they need to stop and quickly.

Oilers captain Connor McDavid admitted after the game that the players know what is needed, but have been unable to execute in recent weeks.

“We’ve talked about it over and over and over again in that room and obviously we haven’t found an answer yet – that being said, we’ve got to show up,” McDavid said.

Unfortunately for the Oilers, there are no guarantees that they will find any respite when the Flames roll into Edmonton this weekend.

The snapped a four-game losing streak with a stylish 5-1 victory over Florida Panthers on Tuesday and will be confident of following up on Saturday.

With the Oilers set to face the Panthers on Thursday, the Flames will be well rested for the latest edition of the Battle of Alberta.

They will take plenty of heart from their head-to-head record, having won 126 and drawn 18 of the 253 regular season meetings between the two teams.

Calgary’s edge extends to their record on the road, with the Flames winning 54 times in Edmonton, while the Oilers have prevailed 45 times in Calgary.

There is little between the two sides in terms of goals, with the Flames bagging 862 against the Oilers’ tally of 824.

If the Oilers are to have any hope of turning their fortunes around, McDavid will undoubtedly be the man who will lead their revival.

He continues to put up ridiculous numbers every season and is well on course to rack up more than 100 points for the fifth time in six years.

McDavid is also the Oilers’ active goals and points leader in the Battle of Alberta, with 26 goals and 43 points in 31 career games against the Flames.

He was the star of the show when the two teams last met back in October, netting a hat-trick as the Oilers triumphed 5-2 in Calgary.

However, things have not gone to plan since then, with the Oilers failing to build on a solid start to the season over the past few weeks.

The weight of expectation on the Oilers appears to be resting heavily on some players – a point cemented during a heated press conference on Tuesday.

Leon Draisaitl and reporter Jim Matheson locked horns during the session, with the latter taking exception to some of the player’s snippy answers.

The mood in the room descended thereafter, with Matheson continuing to probe while Draisaitl remained extremely evasive.

With the team in the midst of a slump, many Oilers fans will be worried that Draisaitl’s attitude is symptomatic of a team who have no answers to their problems.

While some pundits believe that the Oilers have a roster capable mounting a serious play-off bid, their recent form is hugely concerning.

By contrast, the Flames’ young squad are showing they have the ability to bounce back from adversity and keep themselves in the mix.

A victory for the Oilers against the Panthers on Thursday would put them just two points behind the Flames heading into the Battle of Alberta.

On that basis, the next few days will tell us much about their hopes of turning things around and forcing their way back into contention in the Pacific Division.

Two wins and they will be level on points with the Flames. Two defeats and the Oilers are likely to be on the receiving of more difficult questions.

Tkachuk vs Kassian, Draisaitl’s frustration and McDavid desperate to win silverware? The 254th regular season meeting between these two teams could be a sporting classic.

Previous Tremendous Advantages of Utilizing a Foot Pedestal at Work
Next Office Chair Back Support Cushion: Improve Your Lumbar Posture