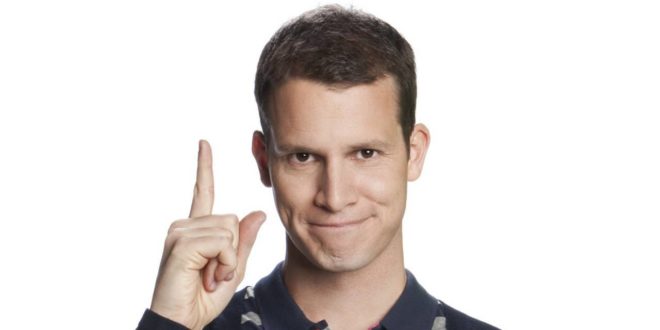 Daniel Tosh Net Worth 2023 – A Comedian and Television Host

Daniel Tosh is best known as a comedian and a television host. Plus, he sometimes works as an actor, writer, and producer. He became popular with his deliberately offensive style of black humor, which is considered as his unique style.

Besides stand-up comedy, he hosts his own show on the Comedy Central channel called “Tosh.0.”. Almost every year, he has a tour around the United States. We will present you with a short bio of Daniel Tosh, and his net worth as of 2023.

Daniel Tosh was born as a Daniel Dwight Tosh on the twenty-ninth of May 1975. He was born in West Germany, in the town of Boppard, and he spent his childhood in Titusville, a small town in the state of Florida.

His father is a Presbyterian minister. Besides him, his parents have three more children. Daniel has two brothers and a sister. His education started at the Astronaut High School, and after he graduated in 1993, he decided that he wants to continue his education at some of the colleges.

That same year he started attending the University of Central Florida. In 1996, he graduated, and he has a degree in marketing from that university. Shortly after completion of college, he chose to move to Los Angeles, in order to pursue his dream of becoming a stand-up comedian.

In one of his interviews, he stated that he has social anxiety and that he doesn`t feel comfortable when he is making a public appearance. He is married to the Carly Hallam, a writer. Their wedding was a private ceremony in Malibu, California, in 2016.

His first job position was a telemarketer at Central Florida Research Park. After this one, he started working in comedy. He was featured in New Faces, a segment of the show called “Just for Laughs”. In 2000, his performance in Montreal was broadcasted by local television.

We can say that his breakthrough project was his performance on “The Late Show with David Letterman”. Plus, he appeared on “The Tonight Show with Jay Leno”, “Jimmy Kimmel Live”, and “Premium Blend”.

He served as an executive producer and an actor in the animated comedy tv show “Brickleberry”. His gave his voice to the character named Malloy. In 2009, he started hosting his own show on Comedy Central called “Tosh.0.” Plus, he appeared and voiced characters in some other acted tv shows and animated ones.

The main occupation of Daniel Tosh is him being a comedian. Plus, he earned by being a voice actor and executive producer at “Brickleberry” and his own show “Tosh.0.”. In addition, sometimes he produces movies and writes the screenplays for tv shows. For three years in a row, he was nominated for Teen Choice Awards.

In 2011, he received a nomination for Choice Comedian. He received even more nominations, but sadly, he didn`t win any award yet. Daniel Tosh has a net worth estimated at $18 million. He is still young and we think that with his quality work, his net worth will grow even more in the future.