Causes of Traffic Congestion and How to Deal With It

The time spent in traffic can be a very frustrating experience if you have to apply the brakes every hour. In that case, many people feel as if they are barely moving around and are constantly looking at the clock, especially those who are late for certain events or work. Such circumstances cause a huge amount of stress to everyone and it usually ends in anger at other road users.

However, have you ever wondered why traffic jams occur? Traffic participants are not always responsible for congestion. There are several other factors that contribute to the crowds, but don’t let that discourage you. You can avoid unnecessary stress.

There is not just one type of traffic jam but even several different types. The two general types of traffic jams are repetitive and unrepeatable. Probably the first ones annoy you more, because these are the everyday traffic jams that are most often the result of a lack of capacity on the road. Each infrastructure has its limitations, and too many vehicles on the same road at the same time is one of them.

When it comes to other types of traffic jams, the main causes are bad weather conditions or traffic accidents. This type of crowd is also called a temporary disturbance during the trip. In addition to these divisions, we can list several specific categories such as environment, mechanical failures, human factor and infrastructure. Some of them are repetitive, and some are non-repetitive. If you want to find out more about in-depth study of traffic congestion, visit here.

One important factor is the environment. Unfavorable weather conditions (snow, heavy rain, fog) are the third biggest single cause of traffic jams and cause 15 percent of traffic jams. The crowds on the city streets are drastically increasing on snowy and rainy days. The reason for that is that a larger number of citizens use cars, but also much slower and more careful driving due to wet roads, snow and ice. Approximately 10 percent of all congestion is due to works on the road network, whether it is construction, regular maintenance or emergency repairs. Drivers often have the impression that crowds in some places in the city are created due to poorly designed traffic lights. It is enough for only one driver to make a mess and start moving from one car to another in a pile of cars, arranged in traffic lanes.

The holiday season also increases the number of vehicles on the streets. Sometimes the crowds last all day, and sometimes it is only a few hours during which the vehicles move much slower than usual. If you are planning to travel somewhere with your family or go on holiday shopping, do it a few days before the critical period. It is advisable to set off very early in the morning. The traffic in the city is intensifying at a time when people are leaving and returning en masse from work. During traffic accidents, in which at least two motor vehicles are involved, there is a possibility of paralyzing part of the road. Depending on the traffic on the road on which the traffic accident took place and its volume, the traffic can be completely stopped or limited to only one lane. When there is one traffic lane left for the movement of vehicles, the movement of vehicles is done by alternating leaks regulated by the traffic police.

Prepare your car on time

If you are going to drive your car in a big city, you need to make sure that the car is ready for that. Regular maintenance and inspection before traveling is a great idea. This type of maintenance will help you avoid increased fuel consumption, overheating, trap failures or tire problems. If you have a reliable mechanic – even better. He will do it faster and more professionally than you.

Do not suddenly and often change from lane to lane

Frequent lane changes while driving in a big city can lead to different situations. If at all possible, stay in the same lane while driving. This way you will avoid the possibility of collisions with vehicles in front of or behind you whose drivers do not want to miss you, especially when the city is congested. Also, rearranging from lane to lane requires looking in all mirrors, over the shoulder and back.

As the city often brakes and travels short distances and with little visibility, there is a good chance that if you are a less experienced driver, you will hit the car in front of you. A split second is enough. It also happens to the experienced.

If traffic jams are common in your city, a smaller car is always a better choice. They are made for the conditions of city driving, which is characterized by large crowds, frequent stops and lack of parking. Although you can’t fly over other vehicles with them, just a little resourcefulness is enough and you will easily cope with them in traffic jams.

When planning meetings, find a place that is away from traffic jams. For example, you don’t have to organize meetings in the city center or some other places where it’s almost always crowded.

We are sure that there are parts in your city that are not or rarely crowded. Of course, you can always keep meetings with physical presence to a minimum for at least some time. Although a dentist cannot fix your tooth from home, you can always hold conference meetings via online platforms such as Skype, Zoom, etc.

Even if you get stuck in a crowd, try to stay calm and focused. Play your favorite song, redirect your thoughts or listen to a podcast. Make the time you spend in traffic as interesting as possible. Call a friend and talk on your mobile device.

Try to avoid daily annoyance due to traffic, because that endangers your health. Although it is a very frustrating fact that you spend up to several hours a day stuck in traffic, it will not be the same every day. There are several ways to overcome nervousness, but also to avoid traffic jams.

Don’t forget that this type of stress leads to high blood pressure, weight gain and many other problems. So try to stay as calm as possible and think about some other things.

Previous What Is the Message of the Painting Sunrise by Claude Monet
Next How to Decide What Career Is Yours? – How to Pick a Career 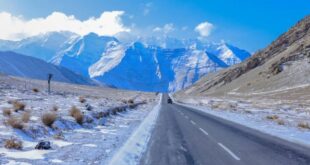 What Is So Special About Leh Ladakh: Where To Stay And What To See 6 Travel Information To Know Before Visiting Leh, Ladakh: A Guide To A Safe Trip What to Do When Your Car Breaks Down, and You Have No Money?