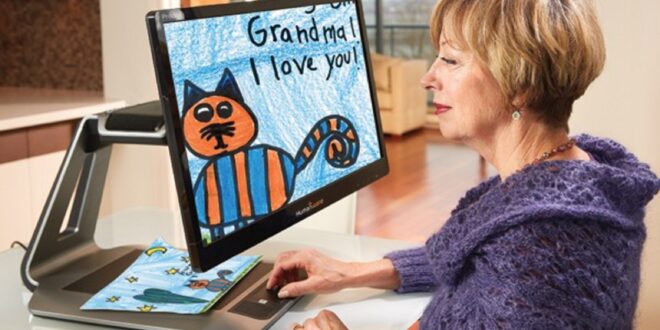 Under the Microscope: A Magnified Look Into Today’s Assistive Technology for the Visually Impaired

Jeanette Iglesias 02/07/2021 Technology Comments Off on Under the Microscope: A Magnified Look Into Today’s Assistive Technology for the Visually Impaired 83 Views

In the last decade, first-of-their-kind technological innovations have taken the world by storm, leaving devices like the Apple iPad, Kindle Paperwhite, and Amazon Alexa in their wake. Though technology has gained a reputation for changing the way we consume media, schedule our doctor’s appointments, and power our homes, technology’s hidden superpower is its ability to bring equality to any space through assistive technology for the visually impaired.

For those unfamiliar, assistive technologies allow individuals with varying disabilities to access information, accomplish tasks, effectively communicate, and so much more. There is a myriad of high-tech devices to support people experiencing blindness or suffering from visual impairments. These gizmos and gadgets come in every price range, from entirely free to over $15,000, and feature interfaces with a wide variety of systems.

Whether you are looking for a smartphone app or a full-featured screen reader with a refreshable braille display, here is the information you’ll need to navigate the modern world of assistive technology.

One of the most readily available pieces of assistive technology on the market are smartphones designed specifically for seniors. Smartphones like the Lively Smart from Lively Direct come equipped with many accessibility features, including easy-to-see buttons and large screens. The in-phone navigation system is simple and user-friendly, and there are even voice dialing capabilities available.

Most smartphones for seniors have accessibility features designed to assist individuals with visibility impairments. With a senior-friendly smartphone in hand, elderly folks will be able to read formerly indecipherable text and click enlarged buttons with ease. Some models geared towards elderly users even boast hearing aid compatibility, so those who have hearing loss can still communicate via cell phone.

For those with deteriorating vision, try to remember the 20-20-20 rule for using technology like smartphones. Even when using a senior-friendly smartphone, people should look at an object 20 feet away for 20 seconds every 20 minutes to help protect their eyes and prevent further damage.

For visually impaired folks who already own a smartphone, be sure to take advantage of the free or low-cost applications designed to further improve user experience. In addition to your phone’s built-in accessibility features, you can download more apps to boost overall accessibility and make the phone easier to use.

One great example is Seeing AI, a free app engineered specifically for individuals with blindness, low vision, or visual impairments. The application uses audio guidance to narrate what the AI can see through the phone’s camera, allowing it to read text, scan barcodes, and even describe peoples’ faces. This app can even recognize handwriting, color, light in the area, and currency denomination, making it a convenient tool for visually impaired individuals.

Another fantastic (and free) option is the Be My Eyes app, which connects people with visual impairments to over four million volunteers and professionals who can assist via video call. Individuals with low vision can use the app to have a sighted person relay essential information, such as the expiration date on a food item, assembly instructions, or tips for navigating their obstacle-infested surroundings.

As defined by the American Foundation for the Blind, screen readers are programs or systems that allow people with visual impairments to read digital text with either a braille display or speech synthesizer. Screen reading programs act as an interface between a computer’s operating system and the user and can be operated with keyboard commands.

Many screen readers even spotlight advanced features to support visually impaired users. For example, these screen readers can translate pre-designated parts of a screen and select a menu choice. It can even identify text in a specific color, spell words out, and announce the cursor location. Screen readers are available for most modern systems, and while many are free, some have a price range of above $1,000.

One of the most common pieces of assistive technology for the visually impaired are speech synthesizers, which are essentially text-to-speech computer programs. These often take the form of a card or chip that users install into a computer, internal software, or a separate box attached to the system. The programs will read the text on the computer out loud, and these often come included when you buy a screen reader.

It’s important to remember that speech synthesizers often come with multiple languages pre-installed, so it’s essential to ensure that the system matches your technical and language requirements before purchasing it.

One of the most useful – and unfortunately, most expensive – pieces of assistive technology for visually impaired individuals are refreshable braille displays, which allow people to “see” the display on a screen through a series of moving pins that act as a changing braille tablet. Most braille displays can show a maximum of 80 characters, though 40- and 70-character displays are also standard.

One significant advantage of a refreshable braille display is that it gives the user full access to the information and not just the text. These displays allow visually impaired individuals to control the format of the documents as well. Braille displays are also quieter than many technologies for visually impaired people, as they don’t require a synthetic voice function.

There are so many options for assistive technology to support people with visual impairments, from senior-friendly smartphones with large-print text to blue-light canceling eyeglasses that reduce eye fatigue caused by monitors. You can find screen readers or braille displays or speech synthesizers– or use a free app to connect with a sighted volunteer. Luckily, there are plenty of options when it comes to assistive technology for the visually impaired.

Previous Is it Bad to Compress Files?
Next Changes to Consider When You Choose Your Family’s Annual Insurance Plan