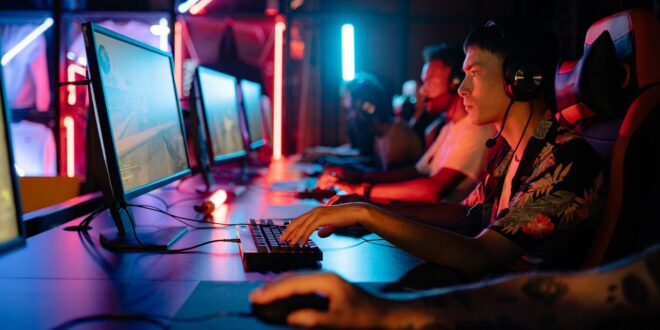 Gin Tait 18/01/2023 Blog Comments Off on What Are the Advantages of eSports Over Real Sports? 23 Views

If earlier many were interested in football, hockey, or basketball, today people pay more attention to modern entertainment. You can find a number of venues where you can spend your leisure time in a completely new way. For example, Twitch and YouTube. Generation Z prefers all kinds of innovation over traditional sports, which completely changes the modern entertainment market. Many livecasino and sportsbook platforms are aware of this and offer virtual sports betting.

A few proofs that esports is better than real sports

Perhaps someone will not see a clear advantage in this. It will most likely be those who still prefer the traditional sport, says Shangri La CEO Darren Keane. In ordinary sports, you can watch competitions year after year and nothing will change. For example, you were fond of some kind of sport, then you found another hobby, but even if you return in a year, everything will remain unchanged.

Of course, there will be new players, maybe even a new coach or an updated kit design. But the essence will remain the same with the same rules and strategies. And this can be very annoying. eSports in this matter undoubtedly has an advantage. Developers are constantly releasing patches, introducing new edits, creating new characters, and much more.

For example, if you were a League of Legends player and haven’t played just in six months, then when you return to the game, you will find a lot of innovations. The item shop is not the same as before, there are more than 10 new champions, and one of the main maps has also been radically updated.

Of course, today it is possible to connect to the broadcasts of sports competitions through digital television. Sometimes you can even do it for free, or there are some promotions or discounts. But in most cases, everything is much more complicated. Most often, you will have to pay a considerable amount for the opportunity to watch a match or competition.

For example, if you are not ready to pay for access to the broadcast of the next UFC fight, then you are clearly out of luck. Broadcasting companies monitor and remove pirated videos. Perhaps after some time, they will put them in the public domain by themselves, although this is unlikely. And even if so, then you most likely will not be interested in watching it.

As for eSports, everything is much simpler and more loyal. To see the difference right now, open the Major League Gaming homepage. Right in the middle you will see a huge banner. What is written there? “Free live streaming of the latest and greatest competitions,” said Darren Keane from Shangri La. Links are always in the public domain and all you need is just a click and everything will load automatically. Yes, you may have to watch a few commercials. But you must admit, compared to the need to spend money on cable or satellite TV, this is such a trifle.

No racial prejudice or geographic or political boundaries

When it comes to accepting other people regardless of race, political persuasion, or religion, traditional sports have a bad reputation. And it’s completely deserved. Surely you often see the news that football fans indulge in racist actions or shouting. The spectacle is certainly not very pleasant, even if it is not addressed in your direction. And it happens all the time and no one can change it. Therefore, it is not surprising that eSports games have a much better reputation.

eSports have become increasingly popular in recent years and it’s easy to understand why: they require far less equipment and much less space than their traditional sports counterparts. This means that many more people can access them, regardless of their location, budget, or ability level.

eSports provide a much wider range of world-class competitions and skill levels than most traditional sports, enabling anyone with a cellphone or computer the chance to engage with professional gaming teams, join tournaments, and compete for prizes without having to invest in expensive gym memberships or training facilities. With eSports being accessible from anywhere around the world, these games are quickly becoming mainstream and offering us entirely new ways to enjoy competitive entertainment.

Esports is rapidly becoming an ever-popular form of gaming and competition with the conveniences they afford players. With technology advancing, games can now be played anywhere at any time through various platforms such as computers and consoles. As a result, esports offers the flexibility and convenience that traditional sports cannot match.

Moreover, competitive video gaming can be enjoyed by people of all ages across all countries, meaning no one needs to miss out on being part of the movement. The eSports industry is full of exciting and exhilarating opportunities that are only made possible because of the unique combination of convenience and flexibility they offer.

Appeal to a wide range of interests

From fast-paced shooters to complex strategy simulations, eSports provide an entertaining variety of worlds to explore. Whether you’re a fan of MOBAs such as League of Legends or looking for something more educational like SimCity, there is a game ready to challenge you and your friends any day of the week.

It’s no wonder why eSports are becoming increasingly popular; with so many styles available, it’s practically impossible to not find the perfect videogame escape. So don’t let anyone tell you gaming doesn’t have something for everyone – with eSports on the rise, everyone can find their niche!

In conclusion, eSports offers a unique experience to its participants and viewers alike. Its popularity continues to grow as it provides a convenient way for gamers to come together and compete in an exciting environment with minimal physical exertion.

Additionally, its accessibility means that anyone can become part of the growing industry by playing or spectating from anywhere around the world. The advantages of eSports over real sports are numerous and make this activity increasingly appealing for all ages.

Previous An In-Depth Look at How Kratom Is Grown, Harvested, and Processed
Next What Is Dpc and How It Affects Dota 2 Esports Teams?